After a streak of intermitent ups and downs, Bitcoin (BTC), has finally climbed above the psychological level of $20K. The total crypto market cap has reclaimed $1 trillion mark exhibiting a positive trend.

A sigh of relief for crypto investors and traders as Bitcoin (BTC) surged past $20,000. This can be attributed to a drop in the U.S. Dollar index (DXY), which tends to be inversely correlated with risk assets such as stocks and crypto. According to CoinMarketCap, BTC gained over 8 per cent in the last 24 hours to currently trade at $20,774. The bellweather token increased nearly 3.37 per cent in the past week. Bitcoin’s dominance pushed upwards, rising by 0.73 per cent over the day to 38.52 per cent. 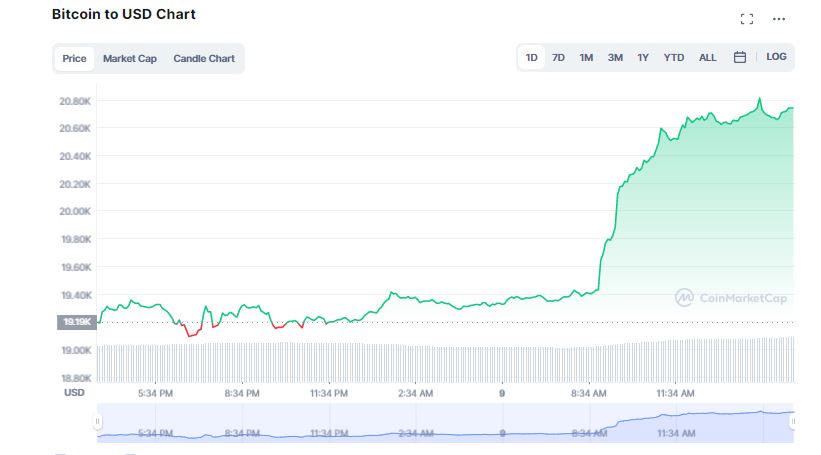 Since the past few days, Bitcoin had been stuggling to go above the $19k level as the DXY Index had gone over $100. As per data from MarketWatch, DXY dropped 1.07 per cent on September 9 lifting BTC’s valuation. The world’s largest cryptocurrency has been grappling inclement weather for quite sometime now as there has been a constant pressure that the Federal Reserve will continue to raise interest rates.

Meanwhile, Ethereum (ETH) has also witnessed a sharp increase over the past day. At the time of writing, ETH, soared 4.45 per cent in the last 24 hours to hover around $1,692. Ether has scaled more than 6 per cent over the last 7 days showcasing positive momentum. 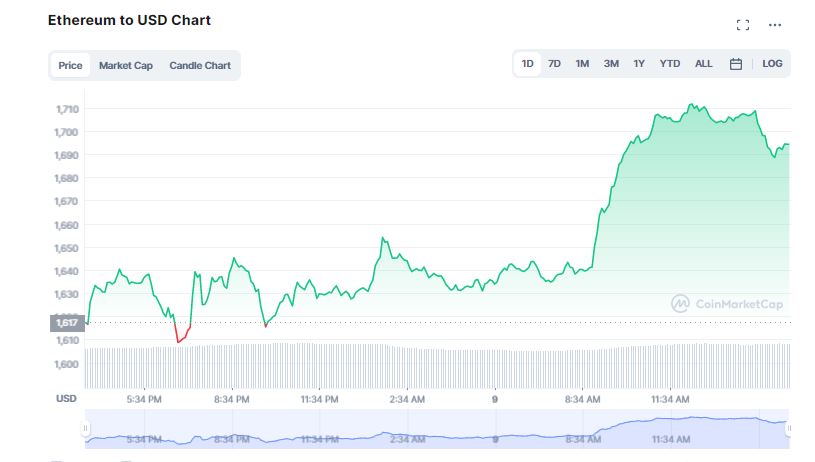 Ethereum’s hotly anticipated upgrade, “Merge“, which will shift the protocol from proof-of-work (PoW) to a more energy-efficient proof-of-stake (PoS) protocol, is roughly a week away. Edul Patel, CEO and Co-founder of global crypto investment platform Mudrex, had earlier suggested that given the on-going trend, ETH may breach $2,000 level before its upgrade. He opined,

“As Ethereum, has been seen to be trading above the 1,500 level. ETH may likely break above the $2,000 level before the Merge.”

Altcoins’ Performance Increased Over the Past Day

On the other hand, major digital tokens were trading with significat gains over the last 24 hours. Solana (SOL) and Polkadot (DOT) soared 7.61 per cent and 8.75 per cent in the last 24 hours, respectively. Within the same time frame, Cardano (ADA) leaped more than 4.50 per cent to $0.4932.

Avalanche (AVAX) zoomed past $20, increasing more than 7 per cent over the past day. In the meantime, Shiba Inu (SHIB) soared by a whopping 8.25 per cent to currently trade at $0.0001322. The global cryptocurrency market cap has jumped 5.68 per cent in the last 24 hours accelerating past $1 trillion. The total crypto market volume over the last 24 hours is $83.98 billion, climbing by 16.45 per cent.

The U.S. Securities and Exchange Commission (SEC) has opposed efforts by two firms to submit amici briefs to court in support of Ripple in the drawn-out $1.3bn XRP securities lawsuit.

According to statistics on October 5, the total computational power backing the Bitcoin network tapped a fresh all-time high reaching 321.15 exahash per second (EH/s). Just after the record high, the network’s total hashrate was coasting along above the 300 EH/s on Wednesday afternoon (ET) at around 303.87 (EH/s). Bitcoin’s Hashrate Reaches a Lifetime High […]

Crypto mergers and acquisitions are up significantly in the last 2 years, and the exchanges have been leading the charge in this regard. These crypto exchanges have taken to buying out the competition in a bid to not only expand their operations but to stay one step ahead of their competitors. This has led to […]

Bitcoin continued to trade above $20,000 on Wednesday, as the token remained near a two-week high. Bullish momentum in cryptocurrency markets has been higher this week, with prices surging after a recent downward spell. Ethereum, on the other hand, was largely unchanged in today’s session. Bitcoin Bitcoin (BTC) was once again trading above $20,000, as […]

A report published by the blockchain researcher Chainalysis showed that the Middle East and North Africa are two of the fastest-growing cryptocurrency markets in the world, with crypto transactions receiving a 48% jump in the year to June from the previous year. Developing the New Era MENA may be one of the smallest cryptocurrency markets, […]